When Delhi Metro Phase III development started, Pink line metro route or line 7 was the first line, to begin with.  This is the longest line on the system with covering up to 58.5 km starting from Majlis Park to Shiv Vihar total consisting of 38 metro stations.

If seen on the map this pink line metro route forms a “U” on the map and in the near future if further development took place under Phase III, then we may see the “U” becoming “O”.

Though this metro line forms a complete “U” on the map, it is technically not possible for someone to go directly from Majlis Park to Shiv Vihar in one go and this is because of the hindrance which causes the rail route to break from Mayur Vihar Pocket 1 to Tirlokpuri.

So, the overall pink line metro works in two sections from Majlis Park to Mayur Vihar Pocket 1 and then from Tirlokpuri to Shiv Vihar.

This pink line metro has too many interconnections of stations such as Netaji Subhash palace at Redline, Punjabi Bagh West at Green Line, and Rajouri Garden at Blueline. All this line makes it possible for one to travel different locations from everywhere to anywhere.

One of the stations at pink line metro is Dhaula Kuan which is the highest point at a height of 23.6 meters. 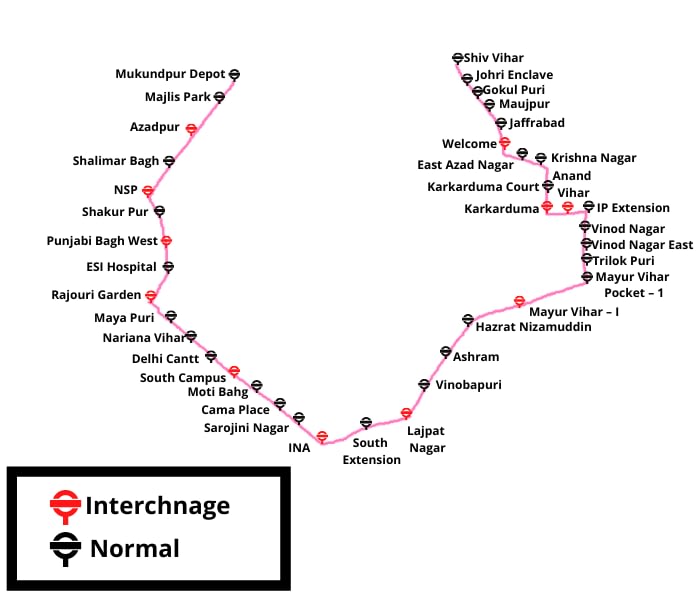 This line also possesses the country’s smallest station ‘Ashram’ with a size of 151.6 meters which is odd against the normal station size of 256 meters.

In the future when phase IV construction begins the line is to be extended from Maujpur-Babarpur to Majlis Park. This way the virtual “U” will be converted into virtual “O”. This way one has not to travel the entire Delhi to go from Majlis Park to Shiv Vihar, he/she simply can cross the Yamuna river and go.