If you just entered your degree college and don’t know anything about what is C programming language, and so on then this article is definitely for you. Please don’t worry this article is not going to be lengthy and boring we will keep it short, precise, and to the point.

Points we will discuss in this article.

C is one of the oldest programming languages which is still used to date and the demand doesn’t seem to be decreasing. 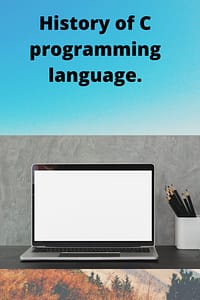 In fact, with increasing new technologies the demand for C developers has also increased.

This language was built by Dennis Ritchie in 1970 at AT & T’s bell labs.

Months after this language came into the market it started taking hold and control of the other language very rapidly.

Two of the most famous programming language of that time PL/I and FORTRAN which is procedural imperative language (a language which mainly deals with calculations, scientific numeric, business problems or system programming) has been left behind by C programming.

Developers from all around started working on C and form a community that empowers the C itself.

What is the C programming language?

Now assembly languages are run or executed on the machine itself where it has been written with a single click of a button. 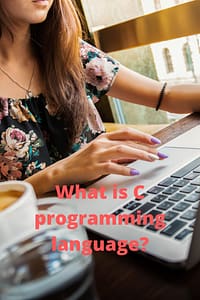 Therefore, a code written in c is first needed to be compiled and then sent to the machine for execution.

While executing object-oriented codes the number of classes their instances and many other things results in the delay of output, but since, in C programming language there is no concept of OOPs the output here comes almost instantly making C language one of the fastest executing code out there.

This much speed of execution gives C the upper hand in many other ways and where it can be directly be used, we will see to it later in this article.

Where do we use the C programming language?

C programming language runs very close to the hardware sometimes it is also called hardware-friendly language that’s why the major part of the operating systems such as Linux, Windows, or Android is written in C.

Being so close to the hardware it also gives an advantage for device drivers to directly communicate with the operating system, therefore device drivers for mouse, printers, scanner, etc. are written in C programming language.

Apart from the device drivers many hardware machines such as washing machines, air conditioners, the micro oven works on C programming language. And here’s the reason why.

As c executes very quickly giving output then and there itself almost in no time with a limited amount of memory.

As described earlier C executes very quickly, it is also widely used for game development where input and output should not be delayed even within a fraction of seconds.

For example in games like PUBG if you fire a bullet and it hits an enemy after one or even after half seconds then it would be no fun to play, therefore in games like this C or frameworks of C are widely used.

Why java is a platform-independent language.

Why should we learn the C programming language?

Well, you may be correct in some cases but no one is telling you to master the C programming language, all we want is just to understands the concepts workflow how codes execute, what is syntax, what is the return type, etc.

Apart from every other programming language be it Java, Python, JavaScript, or even C++ all of these languages are derived from C so you should definitely give it a shot.

While learning C programming language you will come across too many new concepts that you might lose in python for example declaration data types, concepts such as memory allocation, such as pointers, recursion, etc.

How to remove duplicates from list in python With Code?

What is a function in python | what is a method in python?