Without wasting any time, we will jump to the core understanding of why or how java is platform-independent.

But please please read the full article as I have great experience in java and had read almost 50+ articles about java platform-independent, what is Javac, what is java virtual machine (JVM), what is Java Runtime Environment (JRE), what is Java Development Kit (JDK).

First, we will see how programs get executed and run for high-level programming languages like Java, C, or C++.

C/C++ is a high-level programming language that first needs to be compiled by their respective compiler which produces respective .c/.cpp file which can be executed on the platform where these codes are written.

Meaning if you write a program using C/C++ on windows and compiled it there itself it and created a .exe file that is executable code then it will only and only available for that particular machine.

This is how the C/C++ file gets executed. 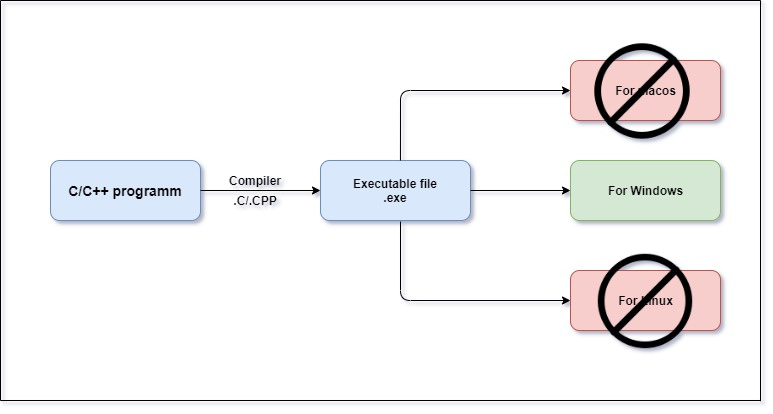 From the above image, it is clear that when a code is compiled on a Windows machine it creates windows executable file that is .exe. likewise, if the code was compiled on Linux or macOS it would have created respective executable code.SH for Linux and Mach-O for macOS.

So, did you see how each operating system has its own compiler? It is this unique compiler that makes the C/C++ platform dependent.

Now this byte code or .class file is pushed into Java Virtual Machine (JVM). JVM is a virtual machine (also known as an interpreter) that resides in the real machine that is your computer. And the only language that JVM understands is machine-level language in this case byte code. Now for each unique machine, there is a unique JVM so if there are a million devices out there, then for each machine, there is a unique JVM.

Once the byte code is accepted by JVM which already understands its language then JVM starts its job. As told earlier it is also known as an interpreter, so JVM starts interpreting the byte code according to respective machines. Now interpreter for different machines is different. By this time, it would have been cleared to you it is JVM which makes Java a platform-independent. If not below image would.

This is how the java file gets executed.

The above image clearly tells us that how java file is executed, you can also see that you can write code on various platform but the output will be the same, meaning if you write some sorting problem on windows then you don’t need to do any changes in order to run it on macOS or Linux all you need to do is simply execute the code on the respective platform and there you go.

This feature makes java a platform-independent language or you can say java is a portable language.

Till this point, we saw java, why it’s platform-independent and makes it so. Now we will see what is JVM, JRE & JDK.

JVM is a virtual machine that resides in the real machine that is your computer, and the best part is that the machine language for JVM is byte code.

Now javac never converts your source code to a machine-understandable language, what it does is converts the .java file to byte code, which JVM already understands.

Therefore, the java compiler gives byte code to JVM (which already understands the byte code of the machine) and thus produces outputs.

If the java compiler starts converting each .java file or says source code into machine understandable language then it would be very difficult, because there are millions of machines.

Now for each operating system, there is a unique JVM.

Therefore JVM is the one who makes Java a platform-independent programming language.

The below image will clarify the overall concepts.

How to remove duplicates from list in python With Code?

What is a function in python | what is a method in python?